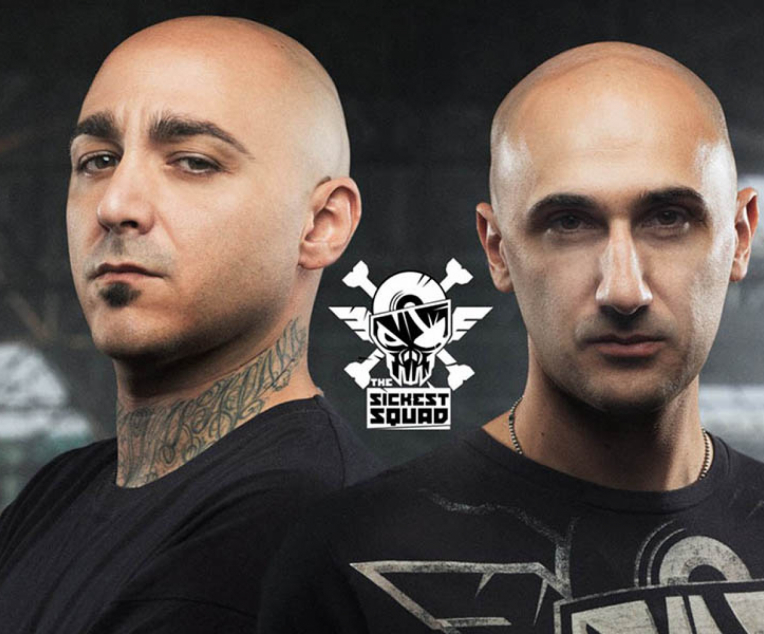 They are without any doubt among the most popular acts in the hardest life form of hardcore.
As some might now, the origin of The Sickest Squad was the Sick DJ Team. Three guys teamed up in 2000: Jacopo Stevanato, Samuele Gozzo and Sirio Carino. After dropping their first EP "Sick 001", they got in touch with The Stunned Guys, who released their "Inspector Fucker" four tracker in 2003 on the G-Net imprint and appeared on the Traxtorm Power 2003 compilation. After this release, they took the time to develop their sound towards the upcoming frenchcore sound. After tweaking, improving and very hard work, they sent a demo of their work to mr. Frenchcore: DJ Radium.

Radium recognized the talent of the trio and contacted them with Randy, who of course owned the Randy 909% label. Randy dropped the "Smart Power" EP together with them in 2005. After that, The Sick DJ Team used a new alias for their music: the "Obbligo o verita" EP was the start of The Sickest Squad, which was the start of a big career in Frenchcore. Their tracks got picked up by the audience, the vinylsales were good and the tracks also made it on various compilations. Their "The Sickest" EP was also an important one for The Sickest Squad: it was the first time that they dropped a track in their notorious "In"-series.

In 2006, The Sickest Squad dropped their second EP on Randy 909%: "Il Clitoride" and 2007 was perhaps one of their most important years for The Sickest Squad, when Lenny Dee and Randy collaborated with them on the well known "Boomshakalaka" EP. Unfortunately Sirio left the group in 2006 after the release of "Il Clitoride". In the mean time, The Sickest Squad got bigger and bigger due to their live-performance legacy. TSS is capable of driving the crowd insane with their very energetic live-performances. They played at a lot of events in the former Dutch club Happy Dayzz, which was the cradle of their fanbase in the Netherlands. The years following was highlighted by the release of their debut album "The Celebration of Decerebration" on the infamous Psychik Genocide label.

2010 was definitely their biggest year in their career. Jacopo and Samuele got to play at a lot of big events in The Netherlands: they have become headlining acts on festivals and in the clubs. It was also the year they signed a deal with Most Wanted DJ to represent them as their bookings agency.

All the hard work as innovators of the Frenchcore sound has payed off. After performing on Masters of Hardcore – Italian Mayhem in 2010, they finally get to play at the world's biggest hardcore event and finally create "The Sickest Squad Concert" concept which every year bring to the people a full Sickcore overdose.

2012 was an important year for their music career cause the team finally release "Opera Prima" which is considered unquestionably the album of the year for planet Hardcore and they also joined two big groups.: "This is hardcore", the biggest hardcore collective ever made in the history composed by 21 of world best hardcore producers and "Thunderdome" crew who gave them their own radio show every last wednesday of the month on Thunderdome Radio.